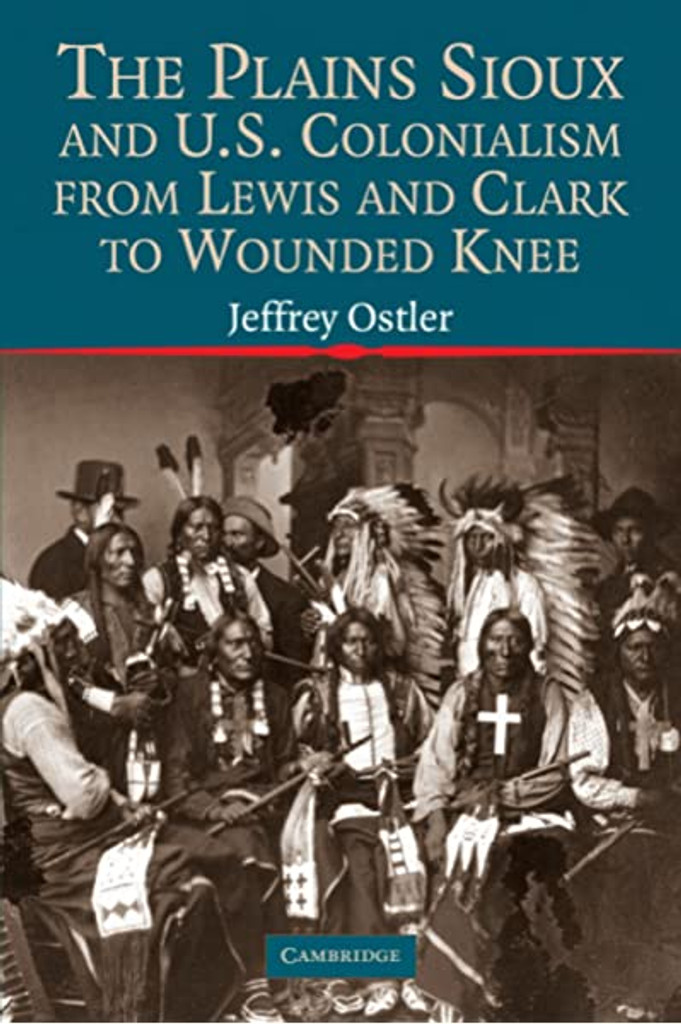 Book: The Plains Sioux and U.S. Colonialsm from Lewis and Clark to Wounded Knee

Through the interpretive lens of colonial theory, Jeffrey Ostler presents an original analysis of the tumultuous relationship between the Plains Sioux and the United States in the 1800s. He provides novel insights on well-known aspects of the Sioux story, such as the Oregon Trail, the deaths of "Crazy Horse" and "Sitting Bull", and the Ghost Dance, and offers an in-depth look at many lesser-known facets of Sioux history and culture. Paying close attention to Sioux perspectives of their history, the book demonstrates how the Sioux creatively responded to the challenges of U.S. expansion and domination, revealing simultaneously how U.S. power increasingly limited the autonomy of their communities as the century came to a close. Ostler's innovative analysis of the Plains Sioux culminates in a compelling reinterpretation of the events that led to the Wounded Knee massacre of December 29, 1890. History Department Head at the University of Oregon, Associate Professor Jeffrey Ostler has held honors such as the National Endowment for the Humanities Fellowship and has published articles in Western Historical Quarterly, Great Plains Quarterly, and Pacific Historical Review.

“The Plains Sioux and the U.S. Colonialism from Lewis and Clark to Wounded Knee” by Jeffrey Ostler is essentially an overview of the Sioux people as they were increasingly subjected to the dominion of the United States throughout the 1800’s. The author starts with this opening statement: “At one time, histories of colonialism were written mostly from the top down and described a unilateral process by which an imperial power established complete power over subject peoples. In recent decades, however, scholars in various parts of the world have paid much greater attention to the process of colonialism from the vantage point of the colonized people and have revealed many ways where colonized people have resisted, contested, and otherwise adapted to colonial regimes.” To emphasize, this particular book highlights the perspective of the indigenous people and presents U.S. colonialism as a dynamic as well as a contested process, moreover a political process in a broad spectrum of the term.
For instance, when it came to colonialism with Lewis and Clark, the Sioux were interested in learning what the would-be explorers had to offer. But, they were not about to risk destroying their livelihoods for some meager so-called ‘gifts’. Stories about a supposed ‘chief’ of 17 nations – in other words, the president, and an air gun to boot. The Sioux could not and would not be bought. Besides, they were already busy dealing and trading on three fronts with the French, British, and Spanish at the time. In addition, the later notion of “Manifest Destiny” in conjecture with the westward expansion of the U.S. where the phrase ‘white race’ started to possess a feeling of grandeur and destiny while the notion of ‘red race’ had only a bleak fate, an ultimatum if you will – assimilate or extinction.
Another instance of colonialism is when the book covered the gruesome event of Wounded Knee. It took perspectives from both sides of the event. However, the defense that the U.S. soldiers came up with still fell short under a staggering weight of horrific facts filled with carnage and death. By the late afternoon when the gunfire finally ceased, between 270 and 300 of the 400 people were dead or mortally wounded. Of these, 170 to 200 were women and children, almost all of whom were slaughtered while fleeing or trying hide to from U.S. officers. The process of colonialism was clearly seen on the fields of Wounded Knee. It was a process to not only suppress, but to snuff out the existence of a noble and proud people.
However, hope did not die at the massacre of Wounded Knee nor did it mark the end of the Sioux nation. Years of struggle and perseverance have paved the way for the Sioux and other indigenous nations across the U.S. They have fought and are still fighting for the return of their land and sacred sites, preserving their language, and reviving various ceremonies, and cultural activities. But the conformity of colonialism can only change through the continued resurgence of indigenous sovereign communities throughout not just the nation but the world as a whole. This possibility will also depend not just on indigenous peoples, but also with the non-natives to recognize and accept the legitimacy of indigenous aspirations which would allow for the structures of a plagued world view to crumble.
Review by Brittany Davila
Reviews