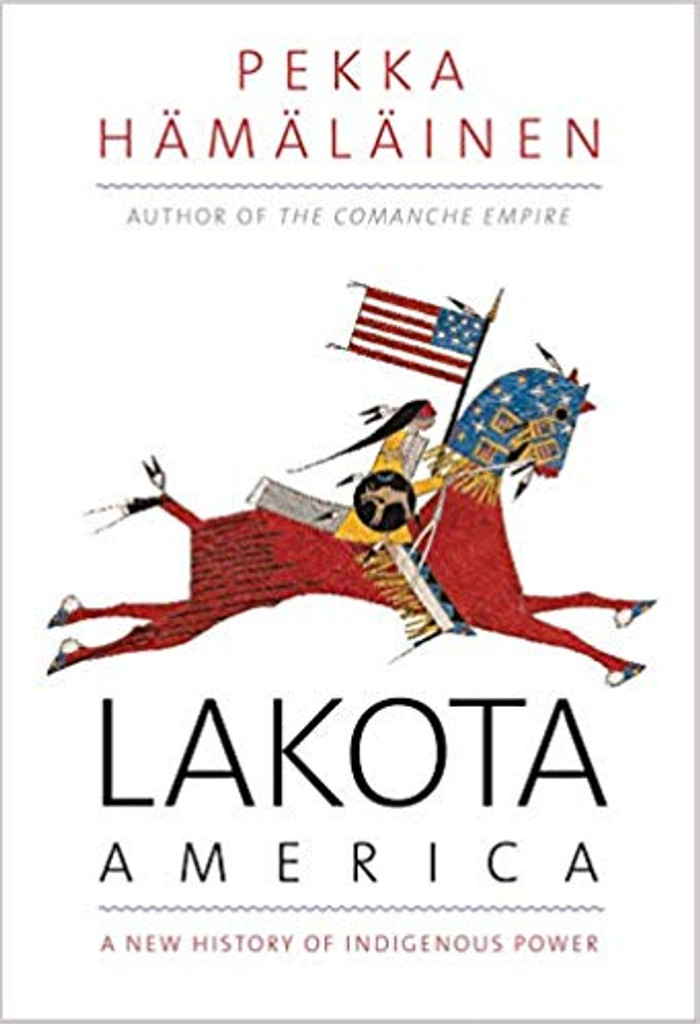 This first complete account of the Lakota Indians traces their rich and often surprising history from the early sixteenth to the early twenty‑first century. Pekka Hämäläinen explores the Lakota roots as marginal hunter‑gatherers and reveals how they reinvented themselves twice: first as a river people who dominated the Missouri Valley, America’s great commercial artery, and then—in what was America’s first sweeping westward expansion—as a horse people who ruled supreme on the vast high plains.

The Lakota are imprinted in American historical memory. Red Cloud, Crazy Horse, and Sitting Bull are iconic figures in the American imagination, but in this groundbreaking book they emerge as something different: the architects of Lakota America, an expansive and enduring Indigenous regime that commanded human fates in the North American interior for generations. Hämäläinen’s deeply researched and engagingly written history places the Lakota at the center of American history, and the results are revelatory.

This book is a history of the Lakota people, drawn from sources that seek to tell the story from a Lakota perspective. The ambition of this book is to understand how we saw the world and helped shape American history.
The Sioux are often thought of as people of the plains. However, during the 17TH century, the Sioux hunted and moved through multiple habitats, from the woodlands, grasslands, and marshlands in a careful annual cycle. So bountiful was their domain, the Sioux could feed a growing population through wild foods and game alone. In 1660, a delegation of Mdewakanton Sioux walked for several days having been summoned five months earlier to Ottawa Lake for a great gathering. There, the Sioux ambassadors met the Frenchmen Radisson and his brother-in-law who were instrumental in opening the Great Lakes Fur Trade. The Sioux seized on the opportunity of French protection if the French provided trade, guns, and iron. However, by the late 1660’s, the Sioux were once again at war with their neighbors who regarded them with extreme fear. In 1672, the Lakes tribes mobilized against the Sioux intending to build a fort in Sioux Country, and waged war against them all winter, with a body of over a thousand men all having guns and powder. This group of warriors managed to surprise some small villages but the Sioux were soon able to gather their defenses and killed the invaders in great numbers. Demoralized, the coalition collapsed. Seriously isolated just a few years before, the Ocheti Sakowin country emerged in the 1680s as a central place where commerce and diplomacy entwined. The Ocheti Sakowin now had allies, iron, and guns.
Distance shielded the Lakota, the westernmost Sioux of the Ocheti Sakowin, against the repeated border conflicts. They were a shadowy people whom the French only caught glimpses of. Within five years of the agreement with the Sioux, the French abandoned trade with the Ocheti Sakowin. The Ocheti Sakowin were forced away from the center of trade, instead of retaliating they turned inward and westward. And this was the beginning of the LAKOTA’s long expansion into the West. In 1708 the Sicangus (Lakota) bought horses from the Omaha. The Lakota were in awe of the horse with its power and eagerness to obey. The horse they called Sunka Wakan. Early in the 18TH century, the Lakota were feverishly scrambling to get both guns and horses where they were working to turn themselves into a true horse and gun power. Until they could, they would be exposed.
In 1749 a new French governor appointed Paul Marin, one of France’s most experienced frontiersman as an ambassador to the Ocheti Sakowin he was to transform the Sioux from a barrier into a bridge for French expansion into the west. Now trade would go where needed to all Sioux villages between the Mississippi and Minnesota Rivers. Thus, the Sioux desire for guns, iron and protection met with France’s desire for profits and power. The French trade helped the Sioux to overcome their rivals and to continue their expansion into the west. Sioux warfare increased, asserting the Lakota as the dominate power among the Ocheti Sakowin.
Iktomi, the son of Inyan, the Rock, was once Ksa or wisdom. Iktomi is the inventor of language, stories, names, and games. However, he was cunning and a trouble maker. He ultimately lost his title and became known as Iktomi, who was a shapeshifting spider-trickster hero. As a result, it is Iktomi who shows what the characteristics of the Lakota People are. It’s their ability and willingness to change. They’re shapeshifters with a capacity to adapt to changing conditions and yet stay Lakota. The horse and the gun added to that shapeshifting, the Lakota became the first Native Nation to fight on horseback with firepower.
Pekka Hamalainen is the Rhodes Professor of American History and Fellow of St. Catherine’s College at Oxford University.
I found this book “Lakota America” fascinating. It answered some questions for me as a Lakota. It gives a historical background of the Lakota People of the Plains with understanding and insight. “Lakota America” is now on the New York Times best seller list.
Reviews