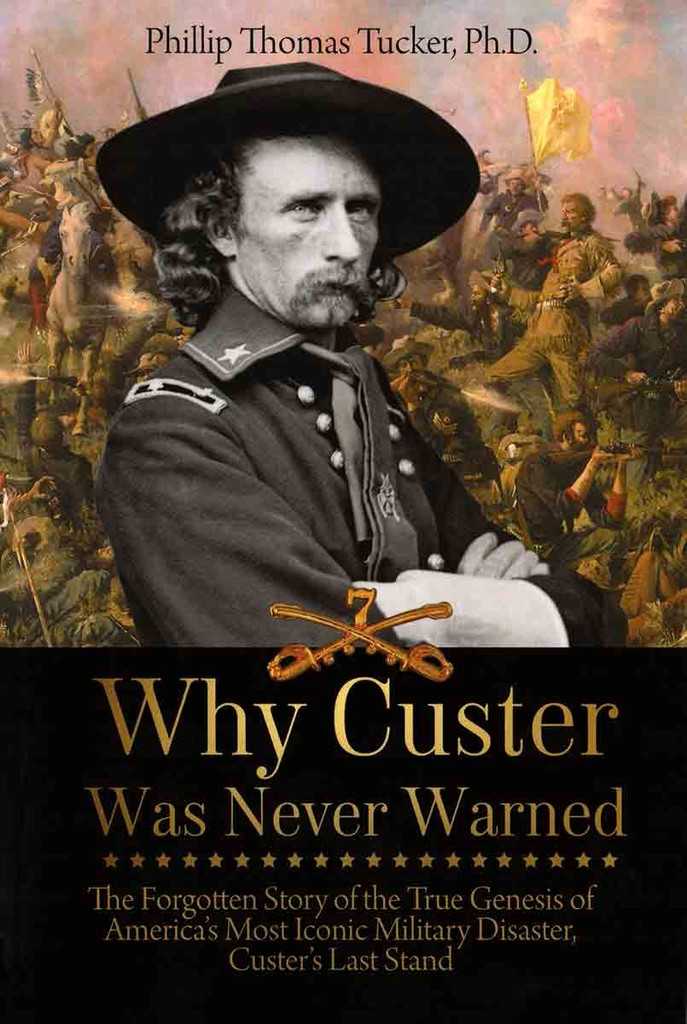 Book - Why Custer Was Never Warned: The Forgotten Story of the True Genesis of America's Most Iconic Military Disaster, Custer's Last Stand

For the first time, this ground-breaking book tells the forgotten story of the true genesis of the June 25, 1876 disaster along the Little Bighorn, "Custer's Last Stand." The failure of the southern column to continue to advance north after the battle of the Rosebud set the stage for the annihilation of George Armstrong Custer and his five companies of the 7th Cavalry at the Little Bighorn.

For nearly 150 years, almost everything possible already has been written about the fascinating story of "Custer's Last Stand" except the analysis and new views that have been emphasized in this most revealing book: the true causes and culprits of the bloody fiasco at the Little Bighorn on June 25, 1876 that shocked the American nation like no other post-Civil War event. Phillip Thomas Tucker, Ph.D., the author of nearly 30 books and including award winners, has contributed many fresh and new views about "Custer's Last Stand," revealing what has long been most often left out of the historical record. Review by Anita: Could Custer have been warned? If so, why not? The Crook fight with Crazy Horse on the Rosebud was only the week before on June 17th and only 25 miles from the Little Bighorn. Crook suffered a humiliating defeat by hundreds of Sioux and Cheyenne warriors, a far more powerful opponent than anything ever previously encountered on the Northern Great Plains. It was also the largest concentration of Lakota, Cheyenne, and smaller tribes led by Crazy Horse. Moreover, this book will tell one of the last remaining untold stories hidden in the history of the Little Bighorn. Was Crook more responsible for the defeat on June 25TH at Greasy Grass (Little Big Horn) than Custer? Crook had friends in high places. Sherman and Sheridan so largely for political reasons and Crook had his multiple failures overlooked. Likewise, it just so happened that Custer and Crook had long been rivals with oversized egos and career ambitions. On top of that, Crook made absolutely no attempt to warn Custer or anyone else of the numbers of heavily armed warriors. Furthermore, Crook was more familiar with the Apache and the Southwest frontier style of warfare. However, fighting against the powerful Sioux and their allies was something altogether different. So as a result, Crook and his men with a sizeable number of Indian scouts were unprepared for the fight on June 17TH. Phillip Thomas Tucker, Ph.D. has earned international acclaim as America’s leading “NEW LOOK” historian for having presented so many highly original and unique historical narratives of importance. Dr. Tucker has delved deeply into American history’s most obscure depths where few other historians have gone before.

Custer Died for Your Sins: An Indian Manifesto (book)

Children's Book: The Medicine Quilt - Inspired by a True Story