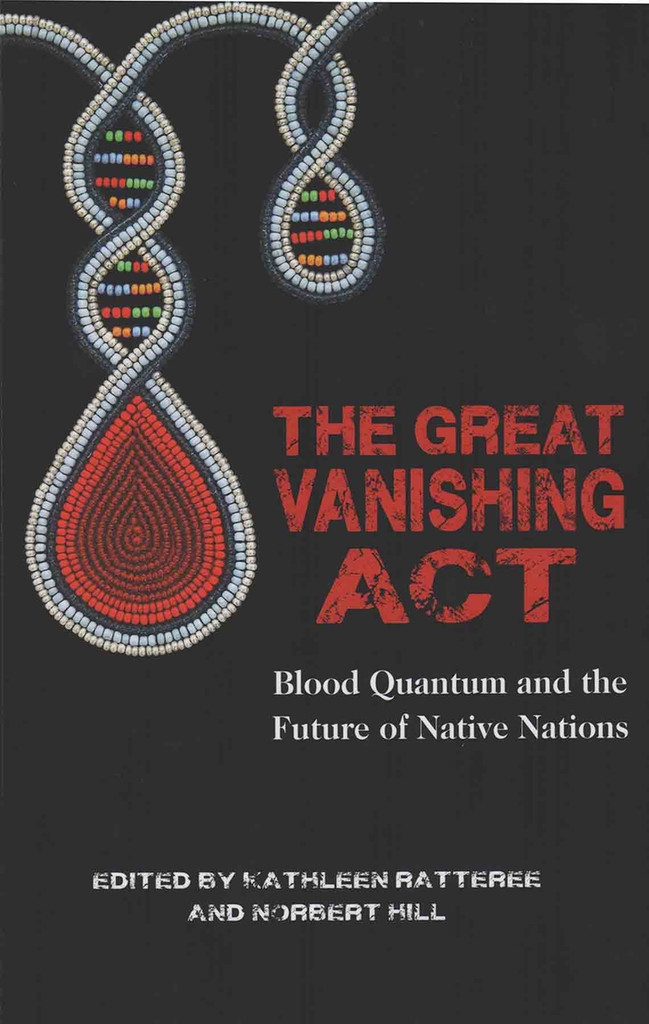 Through essays, personal stories, case studies, satire, and poetry, "The Great Vanishing Act" brings together writers from around the world to explore the biological and cultural metaphor of blood quantum, the most critical issue facing Indigenous populations in the twenty-first century.

The Indian Reorganization Act of 1934 was the U.S. government's attempt to define who "Indians" were. Among the criteria the act set was a blood quantum which declared that "Indians" were "all other persons of one-half or more Indian blood". Today, many tribes wrestle with the legacy of blood quantum and "Indian" identity, as they work to manage tribal enrollment and social services. As the bloodlines grow increasingly diluted, with a few generations, recognized tribes might legally disappear.

Review by Anita: The Indian Reorganization Act of 1934 (IRA) was shattering to tribes, because legislation defined who “INDIANS” were. But tribal governments also have the power to establish their own requirements for membership. “Identity is important. The colonists were very successful ‘radicalizing’ indigenous identities such that people talk about being 25% of this or 40% of that, but one does not belong to a nation based on one’s blood quantum. Belonging to an indigenous nation is a way of being in the world. Holding a membership card is not a way of being and money can’t buy it. John C. Mohawk – Seneca (1945/2006) The Great Vanishing Act is a book of essays, personal stories, and case studies by writers from around the world. Moreover, this book explores the biological and cultural metaphor of blood quantum, the most critical issue facing Indigenous populations in this century. This book has five categories: 1. Cultural Metaphor 2. Decolonizing History 3. Decolonizing Biology and Demography 4. Policy, Law, and Nation Building 5. Where to Go from Here? Moving forward The editors of THE GREAT VANISHING ACT felt their mission was to create a book that was accessible to Native citizens, lawmakers, and tribal leaders. Some are knowledgeable and some are actually approaching these issues for the first time.