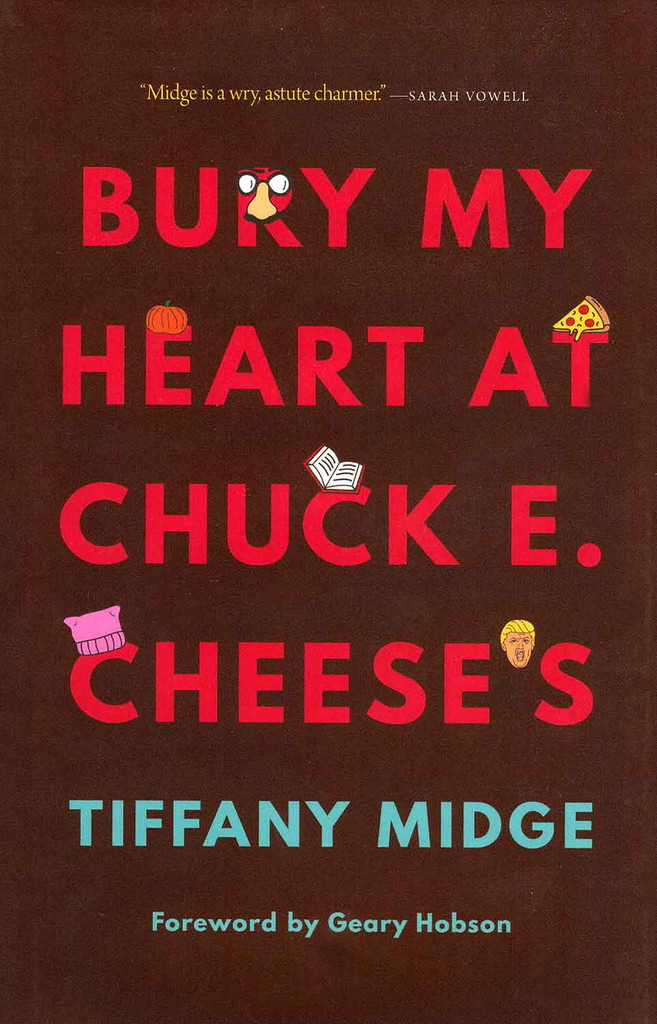 Why is there no Native woman David Sedaris? Or Native Anne Lamott? Humor categories in publishing are packed with books by funny women and humorous sociocultural-political commentary—but no Native women. There are presumably more important concerns in Indian Country. More important than humor? Among the Diné/Navajo, a ceremony is held in honor of a baby’s first laugh. While the context is different, it nonetheless reminds us that laughter is precious, even sacred.

Bury My Heart at Chuck E. Cheese’s is a powerful and compelling collection of Tiffany Midge’s musings on life, politics, and identity as a Native woman in America. Artfully blending sly humor, social commentary, and meditations on love and loss, Midge weaves short, stand-alone musings into a memoir that stares down colonialism while chastising hipsters for abusing pumpkin spice. She explains why she does not like pussy hats, mercilessly dismantles pretendians, and confesses her own struggles with white-bread privilege.

Midge goes on to ponder Standing Rock, feminism, and a tweeting president, all while exploring her own complex identity and the loss of her mother. Employing humor as an act of resistance, these slices of life and matchless takes on urban-Indigenous identity disrupt the colonial narrative and provide commentary on popular culture, media, feminism, and the complications of identity, race, and politics.

As Geary Hobson states in the forward: “Overtime Native American people have generally been portrayed by the dominant culture as being entirely without the least vestiges of humor. But it has always been there, in the writing as well as the living…Indian humor continues to the present day and, I strongly believe grows more potent and deadly with each generation.” This goes for Tiffany Midge’s book as well because she takes the hard, sad, truth of the devastation that has cut Native Americans to the bone for centuries in regards to culture, traditions, and one’s own identity and turned old, outdated viewpoints on its head. Sometimes, to help cope or deal with the hard topics, the uncomfortable topics is with a sharp wit. It’s not meant to belittle or downplay the real happenings that have and are still going on in this day and age. It’s meant to be that speck of light shining at the end of that seemingly long, dark tunnel, it’s that thing that puts the extra pep in your step, it’s the mechanism that makes things just that little bit easier to bear. In Tiffany Midge’s book, “Bury My Heart at Chuck E. Cheese’s”, it is essentially about her inner musings on life, politics, pop culture, and identity as an indigenous person in today’s America. Moreover, the tone effectively blends humor, satire, and harsh honesty together to stare colonialism right in its perpetual face. It’s a book that’s going to either make you shake your head in awkward dismay our laugh out loud because it’s just that funny, not to mention relatable!

Book: To Keep the Land for my Children's Children

My Heart is a Chainsaw: A Novel